I did not finish my sweater. No surprise there. I will keep on working on it to finish, hopefully by the middle of April. I now have a sleeve complete and almost a half of the second sleeve.

Where did the time go???
Posted by Barbara from Nova Scotia at 6:12 PM No comments:

Unless all I do for the remaining days of March is knit on my sweater, it does not look like it will get finished. That would be very disappointing. I always look forward to a new sweater in March. Unfortunately, all I have to show for this month is a back that I already showed you, six and a half inches of a front, most of one sleeve (at the sleeve cap shaping) and no second sleeve.
So totally not good. And uncharacteristic since it's a relatively simple pattern and I've never had so many issues with a Drops pattern before.

Spring sweater madness is sounding pretty good, but I haven't given up quite yet.
Knit on.
Posted by Barbara from Nova Scotia at 8:05 PM No comments:

I may have gotten ever so slightly distracted.

I  finished the back of my sweater as seen in the previous post, quite pleased with myself for getting it done so quickly without working on anything else. I was soooo dedicated, ticking away at a good clip. I had 5 inches of both sleeves done and then ......it happened.

I became the proud owner of MANY MANY pounds of unwashed fleece. Did I say MANY?....I mean roughly oh, 15-20lb..

How do you gals feel about "Spring" sweater madness? You know, we did get started a little late.

I don't know about the two of you, but I have lost a bit of energy. It started with the plane flight back home, spent two days fighting off a migraine followed by the Blahs.

I have blocked one shawl and just completed another Hitchhiker - so I suppose I should get back to the second sleeve rather than have just created yet another WIP/UFO....
Posted by Holly at 10:06 AM 1 comment: 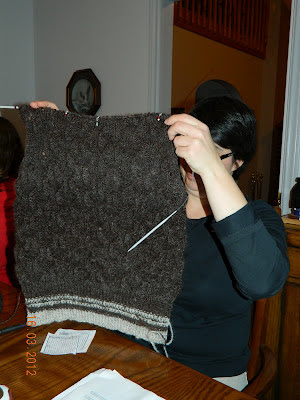 She finished the back of her sweater tonight at knit night and started the fronts. This woman rocks! Did she already tell you that she's using hand spun??? 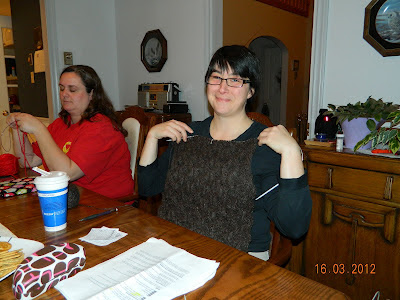 Posted by Barbara from Nova Scotia at 7:09 PM 3 comments:

Progress? Not So Much 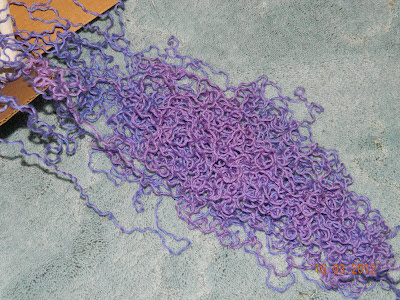 This yarn barf used to be a half of a sleeve, a full ball's worth plus a bit. I switched to working on the sleeve because I needed to make up some time since the front was going so slowly (when I was actually working on, which wasn't that much to be perfectly honest). I was having issues with the sleeve increases. The pattern lack direction as to whether or not the increases should be done in pattern, only that they should be carried out on either side of the k2. The problem is that the sleeves are knit in the round and how the heck are you supposed to make that look right with the Bleeping increases not looking completely out of place? I ripped and tried it several different ways within the first few inches of the sleeve, never quite happy. Then I decided to just stay in stocking stitch for the underarm as I increased. That didn't look quite right either but I kept going anyway. Then Tina came over and I asked her opinion. We hummed and hawed and didn't really come up with a satisfactory fix.
Tonight at knit night, we looked at it again, I ripped back to where the increases started, thinking I'd work the pattern into the centre of the increases. To end this tale of woe, let me say that didn't work (again) and feeling overly frustrated I ripped the remainder of the sleeve and now I have a yarn cake, ready to start over, this time on straight needles. I should have knit the bleeping sleeves flat in the first place. :(
Posted by Barbara from Nova Scotia at 6:46 PM 3 comments: 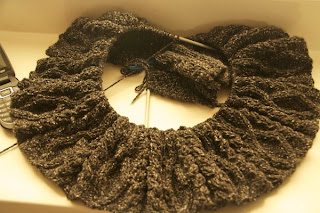 The peplum is done (do you know how long it takes to knit the first few rows of 376 stitches complete with all those cables? - ARGH!)

and the first sleeve is done to 17"

Now, I have to decide if I am going to knit the second sleeve to the same point before starting the front/back extensions and the complicated portions .....
Posted by Holly at 8:52 AM 1 comment:

I haven't touched my sweater in three days. I suspect everyone will have their sweaters done way before I do.

As of Friday, I only finished one complete center cable repeat. Like the titles says, Yikes! I better get knitting.
Posted by Barbara from Nova Scotia at 4:36 PM 3 comments:

This is as close as I get to doing a gauge swatch.... 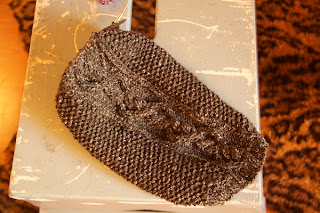 One ball of yarn = about 12" of sleeve. Gauge is correct so I am going to keep on trucking.

If anyone else decides that they ever want to knit this particular sweater - I am posting both corrections and modifications on my Ravelry project page. Trinity stitch? Not in this lifetime. Flat and sew all those weird corners together? I don't think so either.

The Peplum obviously has to be knit flat but I will knit the lower portions of the sleeves in the round followed by knitting them directly onto the peplum as I get there. The way I have it figured there should be only ends to weave in but no sewing.

I don't think catching up with Barbara falls into the realm of possibility, so I am going to have to figure out a neat gift for her!
Posted by Holly at 5:21 AM 2 comments: 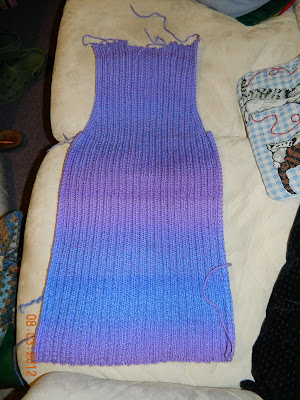 After completing the back in just over two days, I can say that the front will take considerably longer. While the cables are not complicated, they require me to actually pay attention to the charts every other row. 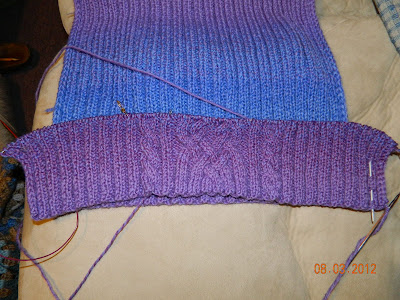 How are the rest of you making out?
Will we be seeing any photos of your crochet project, Rani??
Posted by Barbara from Nova Scotia at 1:12 PM 2 comments: 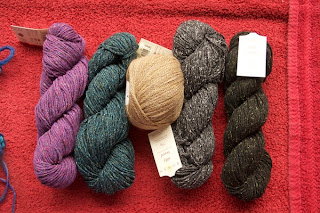 These are the yarn choices I started with. I decided to go with the medium grey which should probably surprise no one. I am not blond, which eliminated the purple (the color looks horrible on me) and I really would be unlikely to wear any of the other three. Boring here, but grey will go with everything I have.

I have just about complete Leif for the youngest - only have the last bit of the hood to finish this evening so that I can justify casting on a new project. I have also knit a hitchhiker scarf in the last two days since I needed a portable knitting project. Leif is not portable -three stranded cables on size 12,00 mm needles means bulky. Not quite random cables but I did eliminate all the YO s in the middle of the cables.

Promise I will post at least some progress tomorrow.

I am also going to convert the sweater to "knit in as you go" so that there will be no sewing to be done at the end: sleeves in the round, etc.

This is the yarn that I'm using. Mine is from Yarn Treehouse though. 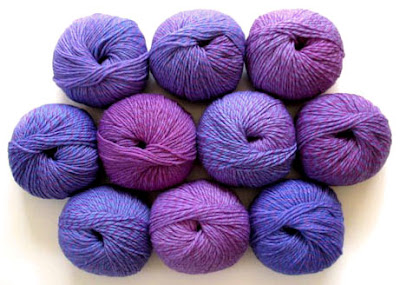 Posted by Barbara from Nova Scotia at 8:08 AM 2 comments:

I finished the back this evening, and established the pattern for the front. Will begin the centre cable tomorrow. Can't wait to see how it will shape up.
Interesting colour transitions in the yarn, and each ball is different. Four balls down so far.
Posted by Barbara from Nova Scotia at 6:01 PM No comments: 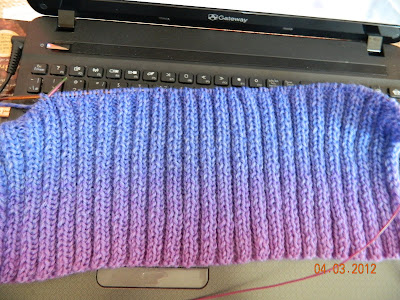 This is how much I got knit out of one ball of Yarn Treehouse 100% wool. The colour is a bit off in this picture. I'll take another this afternoon. As of last night, I'm two and a half balls into the back, amounting to 14" or 35cm.
Posted by Barbara from Nova Scotia at 5:47 AM 2 comments:

After asking the original question it would be really tacky of me to skip out now wouldn't it?

So I decided to let the stash decide. If I could find enough yarn in the right weight that wasn't committed to another project then I would go for it.

About this time two years ago a store called Army-Navy in Camberley (UK) decided to ditch their yarn department. First all of it went to 30% off and I bought some yarn. When they dropped the price on the remaining yarn to 70% off, I went back and stocked up on Rowan. Of course, the stock was pretty picked over and the color choice was weird but what the hey.

Turns out I have four choices of Silky Tweed with 14 skeins or more (Jazz-purple, Inky - blue-green, Conifer - duh dark green, and Sooty - dark grey) and some Red Rowan Aran.

Now, normally I would automatically go for red/grey but thought I would ask all of you for an opinion. As soon as it is light enough to take decent pictures without a flash I will post the pix on my normal blog and would appreciate any comments both on suitability and color. Of Words and Woll

Tina will be joining us, knitting Girl Friday from Knitty. Great choice!

What will you be knitting, Holly?

I've got about 1.5" of the back started on my sweater, after about a gazillion swatches. Photos of my yarn choice and progress tomorrow.
Posted by Barbara from Nova Scotia at 4:11 PM 2 comments: 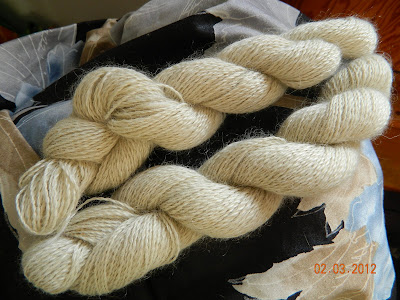 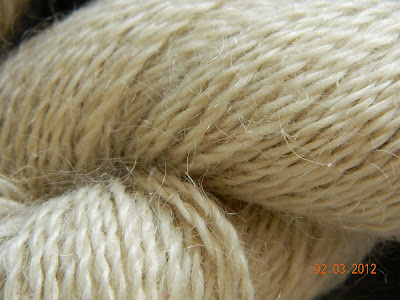 Posted by Barbara from Nova Scotia at 12:56 PM 4 comments:

Welcome to March Sweater Madness 2012!
I hope you will join me! I know we're a bit slow out of the gate on this one, but we can still make the most of it and hopefully have some sweaters to show at the end of the month.

Personally, I've only managed to choose my pattern. I'll be working on the Drops Cabled Sweater. I haven't picked out yarn (from stash, I'm hoping!) and definitely haven't knit a swatch. I have learned an important lesson last year, so I do see a swatch in my future.

So who's going to join me?
Posted by Barbara from Nova Scotia at 7:16 PM 7 comments: